Chanukah is upon us, and with it the celebration of miracles.  But what exactly constitutes a miracle?  Does God still even do miracles in the world?  How do we explain the concept of a miracle to our children?

Conventional wisdom is that Chanukah is about two miracles, the first and foremost being the miracle of the oil that lasted eight days, the other the military victory of the Maccabees over the vastly superior Greek army.  Interestingly, though, the prayer that is inserted into our liturgy on Chanukah, al HaNissim, does not mention oil at all.  Instead, we thank God for standing by us in times of trouble, for delivering the strong into the hands of the weak, and the guilty into the hands of the innocent. We talk about rededicating the Temple. We recall the fact that we set aside eight days for thanksgiving and praise. But Al HaNissim does not mention a miraculous cruse of oil.

Do kids today know that people used to use oil to make light?  In a world where we can simply walk into a room and say “Alexa (or Siri or Google), turn on the light”, who knows from oil lamps?  Telling the kids in a way they can understand might look like the picture at the top of this article…

When we light the candles, we say, “Thank you God, who performed miracles for our ancestors in those days long ago.”  If the miracle was that the single cruse of oil burned for eight days when there was only enough for a single day, what was the miracle on day one?  On the first day there was no miracle since there was already enough oil for a single day.  Nothing miraculous about a day’s worth of oil lasting for – a day.  Maybe there was something else going on.

Perhaps another miracle of Chanukah is the human miracle – that the Maccabees never lost their faith.  Even though they knew they couldn’t win against the mighty Greeks, they went ahead and fought anyway.  Even though they knew that they did not have enough oil to last until they could prepare more, they went ahead and lit the Menorah anyway.  The Maccabees had faith; maybe this is the more important miracle.
​
Midrash tells us that God did not split the sea for us after fleeing Egypt until the first person, Nachshon, waded in until the water was at the level of his nose, thereby showing faith in Hashem.  Perhaps this is why the Maccabees first took up swords and pitchforks against the mighty armies of Antiochus.  Perhaps this is why they lit the menorah that first night - they had faith that if they did their part, God would do His.

Yes, miracles still happen today, and Jews still have hope and faith.  “As long as a Jewish heart beats… our hope will not be lost.” Those are the words of Hatikva, national anthem of the modern state of Israel.  I have heard it said that it is another miracle and proof of God’s existence that Israel exists and is still here.  The founders of Medinat Yisrael had to demonstrate Nachshon-like and Maccabee-like faith that, despite all odds, they would succeed.  As David Ben Gurion said, “Anyone who doesn’t believe in miracles is not a realist.” 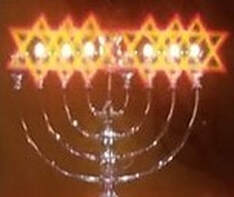 May the coming festival of Chanukah bring you and your family light and joy, and may they renew your faith that miracles still happen today.  As long as we do our part and know how to look, we will see them.